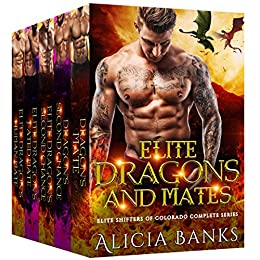 Five Seductive Alphas and their Fated Mates, just to make you sink in the shifter world.
#Elite Dragon Shifters: Strongest and fiercest of the shifter clans.
#Betrayal, Bitter Memories, and Broken Dragons.
BOOK 1: DRAGON’S MATE
My mate comes from an ancient and powerful line of dragon shifters.
I should feel honored and privileged, but I want that human florist.
She is beautiful as those flower arrangements she makes.
I couldn’t resist warmth of her touch and the heat of her body.
My mate deserves love, but my heart pulls me in another direction.
When her intoxicating smell enters my nostrils, I am out of control…
And now she carries my baby.
I will turn the world upside down to protect her.
I am ready to fight; I am ready to kill, even if it is my own Dad.
But… she just got to know I am engaged, and she is not even ready to see my face.
She just knows the half of it, what will happen if she gets to know I am a dragon shifter?
BOOK 2: DRAGON’S SECOND CHANCE
He was the son of the Dragon King and he had been betrayed by his own blood.
He didn’t want his throne back.
And going back to Colorado was the last thing he wanted until he saw her.
He had peered into the depths of her striking and beautiful eyes.
There was something vibrant about that woman, who seemed to deliberately slam herself into him.
And that half-man, who was around her every time, made his blood boil.
He was a danger and he needed to protect her.
He tried to douse the flames of anger, jealousy, and desire.
He knew he was betraying his mate, but he had no control.
She was a human and he didn’t intend to stake a claim on her.
So why did his traitorous heart beat faster and ache when she was around?
BOOK 3: ELITE DRAGON’S SECRET BABY
These enemies to lovers need only one night to make a baby together and change everything.
My life was determined before I was born.
I was to marry a horrible man, Balthazar.
I didn’t have a choice.
The man I refused, hunted me.
His enemy became my lover.
One night with his enemy changed everything.
I was pregnant and scared that he’d shun me too.
So, I ran. Yes, Once Again.
Will he forgive the woman that tried hid most precious thing away, for so long?
BOOK 4: ELITE DRAGON’S FATED MATE
Both of them have secrets, threatening to ruin everything!
I thought I knew what life was about.
My life was simple, marry the one you’re fated to.
Easy enough…
Except, I don’t love her.
My fated mate is actually a nightmare.
And I don’t want to marry her.
My heart is already taken, and she not the woman I am promised to.
And the woman doesn’t even know she possesses it.
A human.
I can’t have her.
And that only makes me want her more.
It is impossible, but still I crave for her.
With the threat of isolation with my choice, I know what it has to be.
I have to have her at any cost.
Before I could do that, I had something waiting for me…
Now as he had decided to break the rules…
Is he going to be shunned by the dragon shifters? Will he even get what he desires?
BOOK 5: ELITE DRAGON’S HUMAN MATE
A car crash started it all, ending a normal life for Cassandra and starting a whole new adventure for them both.
People suck.
I learned that long ago, and as I aged; life didn’t change my mind.
I kept to myself.
I stayed out in the middle of the woods.
Life was quiet and good.
Then I crashed my truck, and that changed everything.
I met Cassandra, the human that was going to be more to me than I could realize.
I started to dream about her.
I started to dream about her.
No matter what was going on, I had to have Cassandra.
I devised a plan, but my inner dragon had other ones.
My dragon won and Cassandra was mine.
With Danger threatening their new happy lives, Antoine is willing to do anything to keep the status quo.
Anything.