All the Kings Men 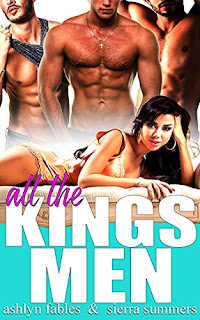 All the Kings Men

When Ana is given over to the Kings Men, the elite fixers of Lowtown, she thinks her life can’t get any worse. Three brutal men seek to claim her, when all she wants is a roof over her head.

Jax, Preston, and Brock have one purpose in this world: to wreak havoc upon anyone who would go against the Kings of Lowtown. As a reward for their good work, their kings gift them with a beautiful woman unlike any they’ve ever had before.

Ana knows these men are terrible. That they deal in lead when words fail. But something about them feeds the darker seed inside of her. And for the first time in their lives, the Kings Men have something they don’t want to give up.

Desperate to keep her, they’re willing to take down anyone or anything that stands in their path. But is Ana willing to lead the life they’re offering her?