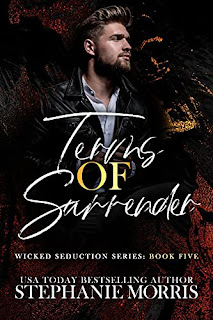 Capricia Rossi has a serious problem, one that she has decided that her best male friend and notorious playboy, Tiziano Fertelli can help with. She’s sexually frustrated and needs a man to help satisfy her desires quick. However, she doesn’t want all of the drama and heartache that can come with getting seriously involved with someone. Been there, done that—twice—and has the scars to prove it. So what’s her solution to the problem? Convince Tiziano that he’s the perfect man to give her what she needs—on a casual basis. Tiziano has never been more shocked than he is when Capricia Rossi takes off all of her clothes in front of him. They are good friends and share a lot, but this is a side of Capricia he never thought that he’d see. The problem is, now that he has, he wants to see a lot more. However, Tiziano has a major challenge on his hands. He knows that he and Capricia can be more than just casual lovers. He just has to get her to surrender to his terms.