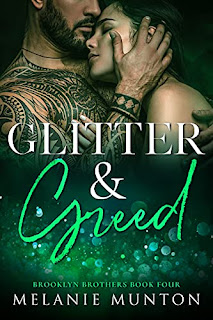 We are the Rossetti’s.
The exiled “sixth family” of the New York mafia. We’re the good guys.
People don’t fear us…much. They respect us.
The five of us? We’re the Brooklyn Brothers.
And we protect what’s ours.
Don’t ask me what made this girl different, what made her stand out. I’m not proud of it, but it wasn’t exactly my first ever lap dance. The last thing I expect is for the same woman I’ve been obsessing over for two months to waltz right into my gym.
Catalina “Cat” Vasquez is the most alluring, sensual woman I’ve ever met. She has secrets, and I want all of them. It’s the only way I can protect her. Because it seems I’m not the only one who’s been looking for her.
Just my luck that I would fall for a woman who has connections with the Mexican cartel. Who would have thought her stalker would be the same man who’s about to wage an all-out war on my turf?
I’m a fighter by nature.
I fight for what’s mine.
And I’m not about to lose to someone who wants to steal Cat away from me.
If he thinks his guns will save him from my fists, he came to the wrong city.