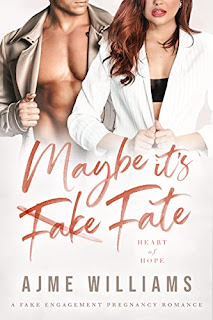 I was on my way in my high heels looking like a boss babe…
Ready to prove to the world that I could make it on my own.
And then…
A hot businessman turned my world upside down.
I was shocked too.
Mainly because that hot businessman was my brother’s best friend.
He lied about being married to me.
I lied about not being in love with him.
It was like just any other modern mess.
Billionaire men have a way of ruining everything.
And when they’re also playboys…?
Let’s just say that my brother won’t be too happy.
Translation: He would be furious!
I would put an end to the mess if it weren’t for a small scandal waiting to erupt.
A baby.
A full-length fake engagement pregnancy romance featuring a super determined woman, who’s out to prove to the world that she is much more than a wild, spoilt and entitled princess. The perfect HEA and absolutely no cliff-hanger! ‘Maybe It’s Fate’ is a part of the Heart of Hope series but stands alone. Books do not have to be read in order.