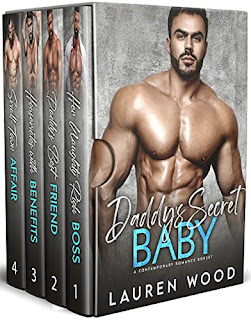 Four delicious Daddies for everyone. Don’t let them wait…
Her Naughty Rich Boss
When a man meets the one, he just knows.
I’d heard it before, but never believed it.
Now I believed.
Now I knew that there were things in life that were inexplicable.
The feeling I had for Gretchen was like that.
She was perfect in my eyes.
Her beautiful, lithe body called to me, curved in all the right spots.
Shiny black hair, bedroom eyes.
She was the catch of the century.
And I wasn’t the only one with a line in.
My partner, Dale, was obsessed with her as well.
He wanted her, though his need wasn’t as pure.
I tried to warn him off, but he kept coming.
When I didn’t move fast enough, Dale threatened to take it all away.
He was going to take away Gretchen and our baby.
I can’t let that happen, no matter who stands in my way.
Even my own friend.
Daddy's Best Friend
Seeing Karen again, I knew I was in trouble.
I’d met her before, a long time ago.
She was a child then.
Not anymore.
My best friend’s daughter was all grown up.
I couldn’t help but notice.
She was perfect in my eyes.
Fresh out of the military and I was aching for a real woman.
Long hair, curves for days.
Her bright eyes pulled me in, and her tight body made me want to stay.
I couldn’t say no.
I should have, but when Karen came onto me, my lips wouldn’t work.
When she disappeared and I heard about her pregnancy, I knew that it was our baby.
My baby.
Housemates with Benefits
As soon as I met Mona, I just knew.
I never believed in ‘love at first sight, but I was becoming a believer.
Now, I knew that one meeting could change everything.
She made me feel like anything was possible.
It started with an ad looking for a housemate.
Mona was beyond beautiful, even if she was off-limits.
I wanted her, needed her, not long after moving in with her.
I was used to getting what I wanted.
I wanted her, but she wasn’t playing the game.
Promising pleasure, as well as a turbulent ride.
I wasn’t the only one looking at her ocean.
She had a crush that threatened to derail us both.
I couldn’t let it happen.
She was meant to be mine, no one else’s.
She didn’t know it yet, but she would.
She would see how we made sense.
A secret baby threatens all of my plans.
I wasn’t going to lose her.
Small-Town Affair
I’m the one that called it off.
The first woman I’ve loved in years, and now she hates me.
Time didn’t make it better, only worse.
Missing her became my occupation.
I don’t blame her for wanting to cut me out of her life.
I earned it.
We had something great going.
I got scared and callously broke her heart.
Her gorgeous body and seductive eyes
Make me jealous as everyone looks her way.
I know I can’t have her, and it kills me.
Mila is the woman every man wants by his side and in his bed.
Sexy, kind and she is going to be a great mother
To my child that she carries, as I tossed her aside.
I am no longer the idiot that called it all off.
I deserve a second chance with her.
I’ll make it right with her.
Then she will forgive me and truly be mine.