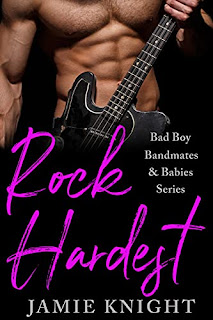 If you could record my heartbeat,
it would be thumping hard for him.
Sven is the sound engineer for a record label.
And he’s as hot as the bands they put out.
He makes the music happen for fans behind the scenes.
And he makes the magic happen for me in person.
We have to keep things on the downlow though.
Because I work as the receptionist for the studio.
At first, I’m happy to be his dirty little secret.
But I soon find myself wanting more.
And I can’t help but think he feels the same.
Especially when he takes me to celebrate a new album.
Does he only want me as his secret?
Or is he trying to become the father of my child?
Rock Hardest is a box set duo of two steamy rock star romance books, featuring bad boy bandmates and babies! Every book in this series is a standalone that can be read on its own but that is also connected to the other books in the series by the setting of a record label in Seattle and by characters who are friends.
The first book in this box set, Hot Guitarist’s Secret Baby, was previously published but has been edited and expanded for this box set. The second book, Under His Dominance, is new and has never been published.
Jamie Knight promises to always bring you a happily ever after filled with plenty of heat. And never any cheating or cliffhangers!