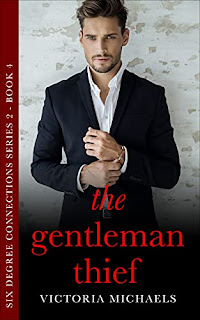 Six degrees of separation is the idea that all people on average, are six or fewer social connections away from each other. A friend of a friend, an uncle or an aunt, my cousin Vinnie, or a coworker may connect any two people in the world in a maximum of six steps.
The ending of each Six Degree Connections Series story leads from a person affected by the current story into the next story. We are all connected. Find out how.
*
Guy Lemay appreciates the better things in life – good food, fine wine, expensive things, and fast women. But these things cost money…lots of money. No worries for this tall, dark-haired, blue-eyed hunk. His French accent and proper gentleman manners turns women wild with passion. He always shows them a good time, lavishing the women with anything they want as if money were no object. And it isn’t. Because Guy Lemay is a gentleman…and a bank robber.
After one failed bank robbery, Guy gets a new plan…and forms a gang. But after that chapter of his life goes awry, Guy decides to get a new life. And a new name…Gaston. He is still a gentleman, but much more careful. After fleeing to Florida, Gaston finds himself oddly enough…in love. Something that is not usual for a man with fleeting interest and a need for thrill and excitement.
Neville King is about to hit it big as a Jazz-Pop singer in Miami. If Miami loves her, the next obvious step is a record deal in California, and then…the world! She is about to hit it big and hit it rich. After meeting a mysterious, good-looking man at one of her after-shows, Neville is surprised to find she is smitten with this gentleman – a total flip from the bad boy rockers she normally dates. But after she discovers something about this too-good-to-be-true love of her life, she’s not sure it’s something she can overlook.
What is Neville getting herself tangled up in, and will this end her music career?
What is Gaston getting himself tangled up in, and will this interfere with his…other business?