Tamed by her Daddies 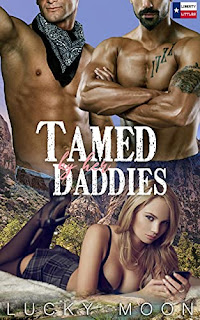 Tamed by her Daddies

They swore they’d never share anything again. Until they met her…
Nate is a hot-headed dominant with a protective nature he swears doesn’t exist. Edan is a demanding perfectionist, who’s desperate to bring out his nurturing side for the right girl. The two men were childhood best friends, but — following a broken promise and a shared tragedy — they became sworn enemies.
Now they’re competing against each other, head to head, on a ranch in Texas. As long as they keep out of each other’s way, they figure, they’ll avoid a punch-up.
But there’s something they didn’t bargain on. More like someone. When they discover a sexy, feisty intruder on their land, Nate and Edan must unite over what’s to be done with her. The girl clearly needs protection — and discipline.
Damaged by her difficult upbringing, fiercely independent June is on a mission for self-discovery. That mission definitely doesn’t involve two bossy alpha males telling her what to do.
Except… there’s something about these two men that appeals to June’s wild side. Before she knows it, she’s making discoveries about herself she never expected. Discoveries like: rules aren’t always made to be broken. And twice the Daddies means twice the rules.
But can Nate and Edan share nicely?
This is a HOT MFM romance featuring consenting adults who are perfect for each other. The heroine ends up with not one but both of her doting Daddies. It includes age play and spanking, plenty of adrenaline, a ton of heart, and a full-blooded Happy Ever After. Why choose? ;) Enjoy!
Book One in the Liberty Littles series, set in the fictional town of Liberty, Texas – an abandoned mining town that is slowly transformed into a perfect haven for Littles and their devoted Doms. The books can be read in any order, but best enjoyed chronologically.