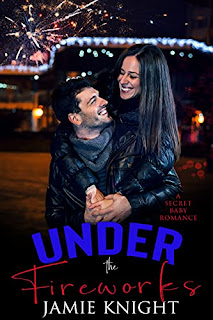 He knows our one-night stand was explosive.
He just doesn’t know it resulted in a baby.
Theo is the hottest guy I’ve ever met.
When we kiss at Summerfest,
the sparks that fly aren’t just from the fireworks.
But rather there’s electricity between us.
But his good looks aren’t the only thing that turns me on.
Sure, he has a handsome face.
And chiseled abs.
But he’s also Dutch and he makes interesting music.
He came to the States to perform at this concert.
But due to strict pandemic policies in the Netherlands,
he has to hurry back home.
I soon find out he left something with me, though.
At first I think I can carry it on my own.
But then he insists on seeing me again.
And he tells me that he loves me.
I’m about to find out just how much.
Will he want to be a father?
Or will it hinder his music career?

Under the Fireworks is a standalone secret baby romance with no cheating, no cliffhanger and a very happily ever after, full of steam.