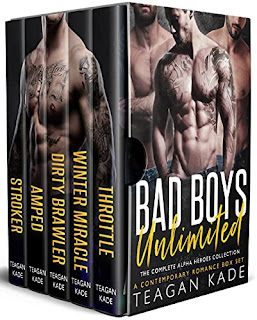 Join the hottest bad boys in fiction for this special collection box set of 5 Amazon Best Sellers. These alpha heroes are bold, strong brutes who will do anything for the women they love. Find your latest book boyfriend today and let him show YOU why bad boys do it better.
Includes the following titles:
Book 1 – Throttle
As a Formula One Champion, he does whatever it takes to win.
But his sexy new PR assistant isn’t proving an easy score.
He’s going to have to pull out all the stops if wants to make her his.
Book 2 – Winter Miracle
He’s the mysterious small-town stranger. She’s got no place to go.
But what does a playboy pilot have to offer a mother and her baby?
The weather outside might be frightful, but things are heating up indoors.
She might just get her first ‘O’ for Christmas after all.
Book 3 – Dirty Brawler
He fights hard, he plays harder, but lately it’s been scandal after scandal.
That’s why he called in a PR lifeline. He didn’t expect it to be a leggy brunette with a mouth to match.
She’s out of his league, but that’s sure as hell not going to stop him trying.
She might have her defenses up, but he’s going to fight tooth and nail until she’s his.
Book 4 – Amped
He parties like a rock star, plays like an All Star, and f*cks like a porn star.
There’s not a woman he can’t make his own, but the only one he wants is off limits.
He should have stayed away, but now he’s home there is no choice. He has to protect her.
He won’t stop until she’s in his arms, his bed, thrashing and crying out his name for more.
Book 5 – Stroker
Swimming is his world. He’s got a real shot at the Olympics… if he doesn’t get kicked out of school for his bad boy ways.
It doesn’t help the coach’s daughter is in town, or that it’s his job to train her.
Too bad she’s completely off limits, because being around her all the time is more than tempting -- it’s torture.