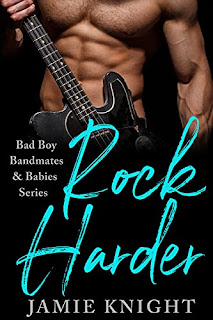 I want to rock her world. And our baby.
Becca is the hottest, curviest woman I've ever met.
Plus, she's a talented music school student.
As a rockstar from Norway,
I'm only in the U.S. for a short time.
But every second that I'm not up on stage,
is one I want to spend under the covers with Becca.
It sucks that I have to leave.
But I'm determined to come back soon.
Especially when I find out that Becca has a secret.
But now she's ignoring my calls.
I swear she fell for me like I fell for her.
So why isn't she telling me she's carrying my child?
I left something in Seattle that's mine.
And I'll cross the world again to claim it.
Rock Harder is a box set duo of two steamy rock star romance books in one, featuring bad boy bandmates and babies! Both are standalone romances that are connected due to the characters being friends. They also both have baby themes!