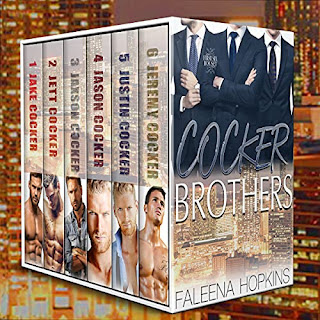 A Roommate Romance to melt the fingers...
Jake has posted an ad seeking a roommate in Atlanta now that his youngest brother and best friend joined the Marines. He expected a man, but a woman shows up, begging him for a chance. Drew's not as prim as both might think and chemistry fires up the pages.

An MC Romance to pump the heart...
Jett rides with The Ciphers - bikers who help the abused who can't help themselves. But when their mission in California throws them up against a wild woman, who sets Jett's blood ablaze, the vengeance Sunshine carries might kill them all, and breaks hearts along the way.

A Cowboy Second-Chance Romance to lasso the inhibition...
No woman has held Jaxson's attention past a minute, save for the one who moved far away when they were just ten. Before their parents unwittingly tore them apart, he offered his little hand in marriage. Now Rachel's back in Atlanta and all grown up, leaving Jaxson's morals with a burning question... can you walk away from the person you've known is your soulmate since you were kids?

A Love Triangle Romance to make the blood shiver...
Jason's title of "The Good Twin" gets put in question as he produces a music album of possibly the most talented singer our future has yet to know. But a snarky little bada$$ be-aatch named Sarah who's managing his current flame has a knack for making life terrible for him. Too bad he likes that. A lot.

A Lovers To Enemies Romance - Yes, you read that right...
"The Bad Twin" has earned his f**king title with no interest in tossing it aside. Life is short. Women, plentiful. Why get attached? Especially when ambition has you by the perpetual suit collar. But so much trouble comes in the form of a woman he doesn't remember from his past who joins his present and threatens his future. Underneath the bad, is there a secret?