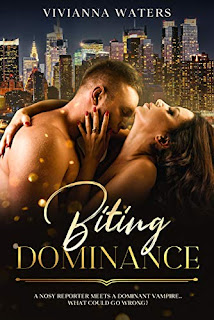 Valentina heard the whispers about the darker side of the erotic club scene. She knew that women were disappearing and as an investigative reporter she intended to find out why. Little did Valentina know that her meddling would draw the attention of the vampire in charge of New York City’s oldest organized crime group. Curiosity might just prove deadly unless Valentina manages to summon all of her wits for the most daunting undercover story of her career. Rowan is watching Valentina from the shadows and it just so happens that he likes what he sees.
Part one of Biting Dominance novella bipartite. An alpha male vampire story stuffed with dominance and romance. Try this paranormal romance if you dare...