Promised at the Moon 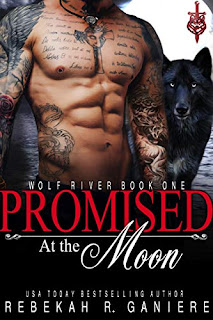 Promised at the Moon

If he can save her from her past, she could be his future.
Natasha Reed is running for her life. With the help of the Night Shift Natasha managed to evade a forced mating, and arrives at a safe house in Seattle with no idea whether her parents are alive or dead.
Liam Grey avoids attachments at all costs. With his own demons to fight, he sticks to relocating shifters in trouble, not playing social worker. But when beautiful, fragile Natasha shows up desperate for more than just a place to stay, his inner wolf howls for a chance to give—and be—everything she needs.
Liam has his hands full keeping Natasha safe– from other werewolves and from his own desire. But when someone from Natasha past tracks her down, Liam will have to push beyond the brink to keep her for himself—or lose her for good.
Warning: Contains an Alpha who can’t help sticking his nose in where it’s not wanted, and a feisty female who secretly wishes he’d rethink his paws-off policy.
Fans of Milly Taiden's Paranormal Dating Agency Series, Kelley Armstrong's Bitten Series, and K.F. Breene will love this series!