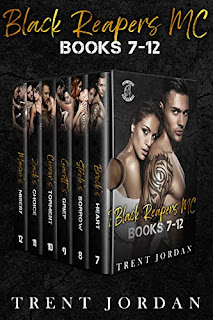 This MC romance box set features six scorching romance novels and a sneak preview of the next book in the series!

Brock
She’s my best friend’s ex—and I must have her.
There’s nothing in our town for men like me.
The Bandits terrorize the residents. The sheriff looks the other way . My brothers and I fight a losing battle.
But one person sees something more in me.
Tara Rogers.
She’s the girl next door—if you happened to grow up in a rich neighborhood. Sexy, smart as hell, and feisty. She’ll knock you on your ass with her body and her wits.
There’s just one problem.
Her ex is my best friend. And not only does he want her back, he refuses to accept any other outcome. He will not take no for an answer.
Well, neither will I.
Which begs the question—who will claim her?
And what will happen when it’s me?
Steele
I always get my way. And she's next.
At first, I wanted nothing to do with Elizabeth Rogers.
Too combative. Too rich. Too smart.
Not to mention the sister of my ex.
But the more I saw her, the more I had to have her.
Those curves.
Those eyes.
That fiery spirit.
When I say I want something, I get it.
And at this point, I want Elizabeth Rogers.
The only question is how I'll get her.
Garrett
She's tempting, irresistible, and quite possibly the literal death of me. And I cannot resist.
Hannah Jett.
Sister of Mason Jett, the club's Sergeant-at-Arms, the most dangerous biker.
He watches over her like a hawk, promising to kill anyone who so much as touches her, let alone sleeps with her.
When I first knew Hannah, she was shy, innocent, and timid.
But in the years since I've seen her, she's grown into something else now.
Fierce. Powerful. Hot.
And I must have her.
I do not care what the consequences are.
I do not care what the fallout must be.
I only care about keeping my lust for her a secret from Mason.
But there's something else I don't anticipate about Hannah.
Something that changes both of our lives forever.
Connor
I don't want her. But I need her.
Katie Lane is exactly the kind of girl I should hate.
If there's one thing I know from my past, it's that women like her always hurt you in the end.
But when I stare at her, I can't help myself.
She's beautiful, sexy, and ferocious.
I want to stay away from her.
But I have a feeling I'm going to need her before it's all said and done.
Zack
I've waited over a year for a second chance. I won't wait another day for her.
Justine Elks is the most exotic, intelligent, and beautiful woman I've ever seen.
She also swears she'll never date a Black Reaper ever again.
It wasn't my fault, but I'm paying the price for it.
But that won't stop me.
I see the look in her eye.
I see the smile she tries to hide when she sees me.
I feel her lust, her passion, her arousal for me.
And after waiting as long as I have for this chance?
I don't care what she says about never dating a Reaper.
She hasn't met anyone like me yet.
Mason
She shouldn't even be alive. And now she could be mine.
A decade ago, the Bandits took everything from Rachel Reid.
Her dignity. Her passion. Her soul.
The horrible events drove us all with rage, but they drove her to disappear.
We never saw her for years. We even thought she might be dead.
But now, rumors are spreading.
She's been seen.
Somehow, she's looking stronger, more beautiful, and more determined than ever.
I shouldn't be feeling this way about her.
She was once Brock's. I'm too old. She's been through too much.
But looking at Rachel has made me feel something I thought I'd never feel again.
And when she starts talking to me, it gets only worse.
For better or for worse, she and I are going to find out just how we really feel about each other.