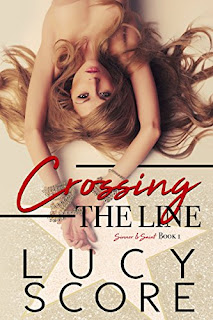 “What I feel for you? It’s not healthy. It’s an obsession.”

From the author of the #1 Amazon bestseller Pretend You’re Mine, Lucy Score once again delivers an unforgettable, suspenseful love story with the first novel in the Sinner & Saint duet.
Rule-bound Xavier Saint has seen it all from the battlefield to the behind-the-scenes business of protecting Hollywood’s elite. His private security firm is the best in the country, but he’s sick of protecting vapid starlets from themselves. Which is exactly what he thinks he’s getting into with Waverly Sinner, a second generation screen goddess. But she’s not just another celebrity on self-destruct.
Waverly Sinner has everything she never wanted. Parts she doesn’t want to play, dangerously manipulative parents, and a public life devoid of any kind of privacy. She hides the panic attacks and the pain behind a movie-star smile and plots her escape from the life she never chose. Until the sinfully sexy Xavier shows up to slam the door shut on her own private prison.
While sparks fly and their battle of wills heats up, a new threat materializes. Someone has been watching her, worshipping her, for years and he’s about to make his very public, very deadly move. Can Xavier stand between her and danger, or will his feelings for Waverly dull his instincts and endanger them both?
Author’s Note: This is the first novel in a two-book series. The stories take place five years apart so my astute readers can guess that this one doesn’t have the happily ever after we all love. But I promise, I more than make up for it with the conclusion of Xavier and Waverly’s story in Breaking the Rules.