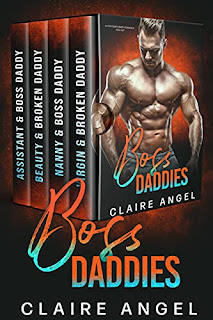 Brooding, ruthless, hot, broken...BOSSES!
How can such irresistible men be such colossal jerks?
Kind, compassionate, sexy, sassy…GIRLS!
Can they stop thinking about making love to them, while they are instantly smitten?
“BOSS DADDIES” is the Collection of Four Steamy Romance Stories:
BOOK 1: Beauty & Broken Daddy
Mom said he had a kind heart, but I can’t find it.
He blows hot and cold, but damn it...I want him!
Office fling, or serious contender for my heart?
Who knows?
Right now, I may smash his face in with an office chair.
Only time will tell.
Will this beautiful young woman steal the heart of her bristly boss? Can he open his wounded heart to love again?
BOOK 2: Assistant & Boss Daddy
I hate my boss. Sure, he is gorgeous and worth a peek every now and then.
He is such a jerk to everyone though.
This is my first job after graduating college, and I remind myself that it is great to have.
I have to work with one of the grumpiest men in the world.
At least I have my friend Jack here.
My boss always shows me toughest side of him.
Now I am on a work trip with him, we kiss in the hotel room.
Why does it seem like he is growing possessive of me? There is a part of me that wants to hate him forever. Would the kiss in our hotel room change everything I worked so hard for, ending my job?
BOOK 3: Virgin & Broken Daddy
I was promised to an old man, a pervert, no less, who made my skin crawl.
What were my parents thinking?
Maybe they secretly hated me. I had no choice but to leave.
Before I hit the ground with a thud was a mugger running off with my bag.
My whole life was in that bloody bag.
Strange town, unfamiliar country, new continent no less.
I found myself in all sorts of jeopardy.
But then he came to my rescue: a strong, kind, and sexy daddy!
A broken heart and a broken promise brought Adam and Siena into each other’s lives. He was reeling from a broken marriage, and she was hiding from a marriage proposal from hell. With so much baggage to unpack, would the two find love in an unexpected place, or would tragedy rip them apart?
BOOK 4: Nanny & Boss Daddy
The fact that he was fabulously wealthy and handsome as all hell may have had something to do with my decision.
But Brad was also bossy.
A big obstacle to a woman like me, who hated being told what to do.
Throw in a contentious housekeeper and an ex-wife from hell, and you have yourself a recipe for disaster.
But I couldn’t help myself.
I wanted Brad from the first time I laid eyes on his tight ass.
My mind and my body fought against each other, but ultimately, I knew who’d win.
Hope Carter wasn’t looking for a nanny’s position, and Brad Stone wasn’t expecting a drop-dead gorgeous woman. Did she accept the position because he was a stud who needed saving? Did he employ her because she was good for his children, or because she stirred his desire?