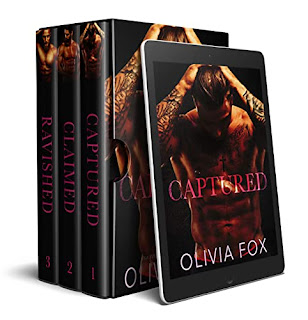 Stone-hearted Predator. Hired Gun. I just call him "Daddy".
Liam Whittaker.
A man who hides in the shadows to seek his prey... unfortunately that's me.
The bad guys want him to haul me in and punish me for my so-called crimes.
But beneath the cynical, stern exterior lies a true and tender heart - one that needs to command me.
Too bad he's employed by corporate thugs to capture me and punish me for my so-called crimes.
He and I don't stand a chance - try and tell that to my overactive libido which kicks in with every dose of his demanding discipline.
I'm a computer hacking, book reading, board game playing nerd who pissed off the villains that sent Liam to find me. Once he delivers me to them, my geeky days on this earth are over.
But his lips scorch my soul and fuse me to him. They say that only in the darkness can you see the stars, and under the spell of twilight, his devouring kisses shoot me up to the heavens.
He tells me I'm a good girl.
But I must run away, half-hoping all the while he'll catch me and keep me forever.

Deep-sea diver left for dead. A speechless siren finds him on the deserted strand. A guy who battles sharks, near drowning, and oozes danger.

The waves of fate tossed him up on the shores of my solitude, and for the first time since the collision, I feel safe.

A man who swims in the ocean depths, fearing nothing.

And he insists that I call him “daddy”. How can I when a horrible accident took my words away forever?

Beneath the steely surface lies a devoted and gentle heart that I don’t want to disappoint - one that needs to claim me as his.

Even though his firm hand and punishments make me squirm, in a good way, this won’t work.

I’m an unusual girl, twenty years his junior, who earns her living selling shellfish.  Eric doesn’t know about the deal I sealed for my aunt’s silence - an arrangement I’d ruin by showing my face in town.

He demands that I’m his, but can this desire burning between us survive the ugly that flourishes where the people are?

A tasty morsel of a lumberjack at that.

An axe-wielding tree feller, plain-spoken and burly. In high school, he barely knew I existed except for our weekly tutoring sessions. It pains me to admit it, I’ve never encountered a man yummier than him.

Now we’re both grown up, and he tells me it’s time to feed the wolf. That I’m the first and only female to speak to the animal he keeps hidden away.

I’m not so sure about that.

Zeke isn’t the only male to make my hormones sing, but he’s the only man I can’t forget.

So what is it between us?

Hormones, or happy ever after?

Every night he lays me bare, looking into my eyes as he takes me to the abyss, and shows me the darkest, most depraved secrets inside me. Somehow he knows more about what I want than I do myself. The things he reveals to me… they’re obscene, scandalous…

I can’t get enough.

When he tells me he needs me. I realize I have to get away. Otherwise, he’s going to pull me into the powerful dark side with him forever, and show me once and for all what my wicked body is made for.

Zeke is the wolf: a bad boy who likes to get his hands dirty. And just like that dark villain, he can see me better, hear me better and eat me better.

The question is, am I ready?

From USA Today Bestseller Olivia Fox comes this enemies to lovers, age gap, and friends to lovers romance. The stand alone books in the Dirty Fairy Tales series, are inspired by Beauty and the Beast, The Little Mermaid, and Little Red Riding Hood. No cheating, and always a Naughty Ever After.