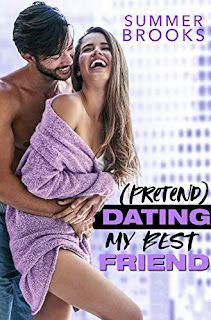 What I was supposed to do:
Pull a prank on my best friend by pretending to be a stranger on a dating app.
What I actually did:
Agreed to be his actual girlfriend once the prank was over.
Correction: Agreed to be his fake girlfriend.
Let me backtrack a little.
How did Roe and I become best friends?
Well, we both loved pizza, and that first cheesy slice of goodness was enough to bond us forever.
I loved everything about the guy.
And I didn’t think that his billionaire playboy attitude would ever bother me.
Why would it?
I wasn’t in love with him or anything...
But damn was I annoyed when he started flirting with me (me as in… the stranger that I was posing as online).
It was hilarious though — I won’t lie.
That silly joke was supposed to end at the gala where I showed up, leaving him stunned.
But instead… one thing led to another, and the next thing I knew?
Celebrity lawyer Roe St. James became my fake boyfriend.
It was all fun and games until…
We planned a trip to Hawaii to keep this pretense going.
One penthouse suite.
Two best friends.
And love was in the air.
Or was it?
Get ready for this magical friends-to-lovers romance that started with a simple kiss, which made Shen Bailey question her entire existence. Roe St. James is perfect for her. He's a perfect friend, an irresistible fake boyfriend, and a gifted lover. But does he have the tools to break the walls around Shen's guarded heart?