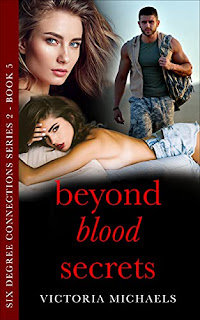 Commander Val Katz is returning home from a three-year operation in Afghanistan. He is an M16 Secret Intelligence Service agent, and his father and stepfamily are waiting for him at a ceremony where he is receiving a medal of honor. His stepmother is nice, but his stepsister is another story; she’s young, perky, and oozing sexuality. She’s eager to get in Val’s pants and tells him so right from their first meeting. Val hasn’t been with a woman for three years and he is longing for a soft feminine touch, but not from his sister! He’s at a loss at how to handle this pushy, amorous, and unrelenting young woman whose bedroom is only mere feet from his own. She will try to break him down. Is he strong enough to resist?
And then he meets his stepmother’s younger sister, Olivia. She is demure, thoughtful, professional, and gorgeous. And she just caught her boyfriend cheating on her. Olivia has ended their engagement, but she is heartbroken. Does she still love Adam? Is it too soon to find out? While in her state of turmoil and confusion, Olivia meets the charming, handsome Val. Later, Olivia and Val both are shocked to realize that she is Val’s psychiatrist. As she guides him through the steps of recovering from his episodes of PTSD, the two become close, soon entering into a steamy relationship.
But there’s trouble; Val’s stoic father, a former military man himself, is running for Senator, and he’s made a few enemies. He enlists Val to help him protect his new family from the unknown threats, but he does not want the girls to know what is going on.
Truly, Val thought that leaving Afghanistan would get him out of the line of fire. But this new family, the new relationships, and his dad’s threats have put Val into a situation that could prove to be more dangerous than one he has ever been in. And the stakes are so much higher.