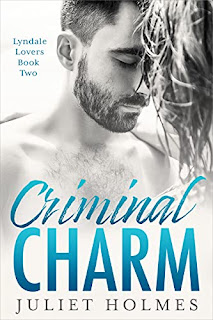 ♥ A small-town, enemies-to-lovers romance! ♥
Officer Cal Pindar is the most boring man alive.
He's had to be boring to keep his father's secrets. The town, his family, and the Feds think his father was a hero, but Cal helped him embezzle money from the crime family he was supposed to be investigating. Every day spent in Lyndale, Texas, is a reminder of his father's spotted past, and he's had enough. He doesn't want to spend the rest of his life swallowing the guilt of knowing the truth, or wondering if he could have saved him.
He’s sick of being the most responsible member of his family, sick of watching the same reality show reruns, and sick of Doris, Nora, and Lorie nagging him to get a girlfriend every time they call him over to rescue their demonic cat. When Denton PD offers him a job an hour away, he jumps at the offer. But just as he’s about to hand in his resignation, he gets the case of his career.
No one knows Violet Shay.
Especially not herself. She's spent her entire childhood in the Witness Protection Program and changed last names so often she can hardly keep them all straight. Two things she does know: she's good at helping troubled children and she hates Officer Cal Pindar. He’s inflexible, stubborn, and every traffic ticket she collects has his name neatly printed on the bottom.
Okay, maybe she’s idly admired his biceps once or twice while he stops by her CPS office. She has eyes. But just because he’s hot doesn’t mean he’s palatable. As far as she’s concerned, he can’t leave town soon enough.
Now he’s all that’s standing between her and a jail cell.
Can Cal clear her name before she’s convicted of a crime she didn’t commit? Or will their lifetime of entwined secrets finally destroy them both?
♥ This is a standalone novel in the Lyndale Lovers Series, and can be read alone! For best enjoyment, however, please be sure to check out Leo and Sage's story in Third Time's a Charm and Hazel and John's story in Small-Town Charm! ♥