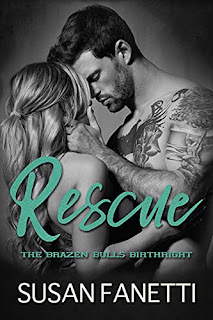 Seth “Dexter” Denson is the Sergeant at Arms of the Brazen Bulls MC. As a former Marine Raider, the skills he honed in war are useful in the club’s battles as well—and the things he does wearing the Bulls patch ride him just as hard as what he did wearing desert camo.
Those aren’t his only demons. From childhood, Dex has struggled every day to control the darkness inside him. He decided a long time ago that he was too dark and damaged to love.
That hasn’t stopped him from wanting Kelsey Helm, eldest daughter of Maverick, the Bulls’ VP—but Kelsey is sweet and good, unsullied by the club’s grimy dealings. If there’s one woman who deserves someone better than a lost cause like him, it’s her.
Her father agrees. Emphatically.
Kelsey has liked Dex since the first time he brought one of his outcast dogs to the clinic where she works as a veterinarian. Watching him love and care for animals the rest of the world gave up on, she knows he’s much more than the club’s most violent patch. It’s not only animals; Dex never hesitates to step up and help those who need it—even at the risk of his own life.
Dex sees himself as a killer, her father sees him as a “psycho,” but Kelsey sees a hero.
Before they can find their way together, they both need to learn trust—in each other and in themselves.
Rescue works both ways.