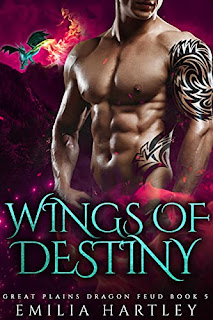 Teagan
She was never big and strong like her family.
They’re dragon shifters, and she’s an owl.
When Reece Montoya almost knocks her out of the sky, she doesn’t expect him to nurse her back to health.
She’s a Barnes, after all. Their families have been enemies for decades.
She also doesn’t expect him to ignite a fire within her. She wants him, and so does her beast.
But Reece is a notorious playboy.
And her father would never allow it.
Reece
He’s not lucky like his sisters.
They have their mates, but he’s starting to think that there’s no mate out there for him.
Until Teagan Barnes comes crashing into his life.
Though his sisters are mated to Barnes men, the hatred between their families still grows strong.
Her father despises him, and she keeps her distance from him even as she recovers in his cabin.
His beast wants to protect her. To help her live her life by her own rules.
To hell with the old feud. That woman is his.