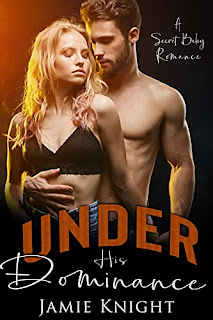 The world's a dangerous place right now.
So I need to keep her under lock and key.
Even if that means putting a baby in her.
Claudia's curves are distracting me at work.
So I have to take her home.
Where I can put my hands all over them.
She likes it so much she lets me tie her up.
The things I like to do to her are risky.
But we have a safe word.
And she knows I'll protect her from anything.
Including the pandemic that's still raging.
Soon, she's agreed to be my pet.
I won't let her see anyone or go anywhere.
Since I'm too busy having fun with her.
But then things get very serious.
Because this dom's about to become a dad.
She might have been surprised, but I'm not.
Let's just say that Claudia is a bit feisty.
And I'll do whatever it takes to keep her.
But how long will she submit to me?
We only have a short-term contract.
But I'm determined to stay in her life forever.
Especially because we've created a new one.
Under His Dominance is a standalone office quarantine romance featuring a dominant billionaire alpha male and a feisty virgin. It was originally published in the Rock Hardest anthology but has been edited and expanded to be released on its own. It has no cheating, no cliffhanger and a very happily ever after.