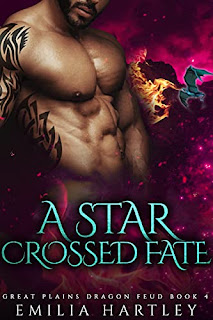 Raven
Torn between love and duty.
Her mother already has a suitor for her. A cruel man who thinks she’s his property.
But her heart belongs to Adrien Barnes. It has since they were kids.
Their families may be old enemies, but many Montoyas have fallen in love with a Barnes, and she’s no different. Her mother will not hear of it, though. A Barnes is simply not good enough.
Her dragon aches to be free, unburdened by responsibility. Her heart begs her to be with Adrien.
But she’s not strong like her sister. She wants to be with Adrien, but she doesn’t want more bloodshed.
She must follow her duty, no matter how much it hurts.
Adrien
Raven Montoya has always been the only one for him, since he was a boy.
As much as he’s tried to forget her, his beast clings to her memory.
But their families have fought for two generations, and her mother will do anything to keep them apart.
She would go as far as to choose a fiancé for her, a man who doesn’t even respect her. A man who can’t make her happy.
He can make her happy. He wants to, more than anything.
He’ll show her that they can be together. He’ll tear the whole world apart if he must.