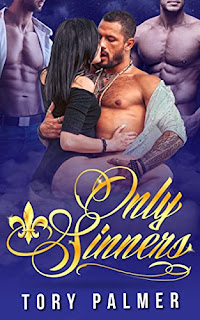 My final night in New Orleans becomes an extended trip with three sexy former soldiers. Too bad it’s the dead girl we found in my best friend’s bed, and not my three new lovers, that’s keeping me in town...

It’s my last night in the city, and a spilled drink leads to dinner and dancing with James and Griff, two former soldiers turned security consultants. James, with his dark blond hair and pale blue eyes that are to die for. And Griff, with his permanently tanned skin and easy smile.
Hard-bodied, hard-eyed, and deadly as sin, these two men are almost too much for one woman to handle. They show me one of the wildest nights any woman has ever known, and leave me wondering how much I’ve missed out on over the years.

Things turn dark the next morning, though, when I take James with me to a brunch date with my friend Veronica, a sorority sister I haven’t seen in years. Because instead of finding Veronica asleep in her bed, we find a dead girl. And, between the girl’s dark wig and slinky lingerie, and her having enough drugs in her to put down an alligator, it’s pretty easy to guess what she does for a living.

Along comes Dallas, the complete a-hole of a boss for Trinity Security Solutions’ New Orleans office. His attitude and the way he barks orders makes me want to tear my hair out, even as his dark green eyes and chiseled jaw makes me secretly wish he’d tear my clothes off!

Dallas can see it as plain as we can that this isn’t any normal dead girl, which is probably why he won’t touch my case with a ten-foot pole. Especially when we find out that the “spa” both the dead girl and my sorority sister work at is actually a Russian mob owned brothel!

Now, I’m in a desperate race to track down Veronica before her Russian employers can, and I’ll need all the help I can get if I want to find her first. James and I convince his boss to let Trinity ride to my rescue, but there’s one concession he and Griff have to make before Dallas agrees to take the contract: “no sleeping with the newest client.”

But, as we dig deeper and deeper into the case, we realize that Veronica is gone, and in danger, for even bigger reasons than any of us ever could have imagined.

On top of that, Dallas and I both soon realize that not even the boss of Trinity Security can obey his own orders!

Can we save Veronica? Can we pull her from the fate of her own decisions?

Or will we all have to pay the price for her mistakes?

Because, New Orleans might be the place where the saints go marching in. But, as far as the men of Trinity Security and I are concerned, this sinking city on the Big Muddy is a city of only sinners.
This is a reverse harem romance with three sexy heroes and one beautiful heroine! No cliffhangers, guaranteed standalone, and 100% guaranteed HEA! Continue the action-packed story of Trinity Security in Book 3!