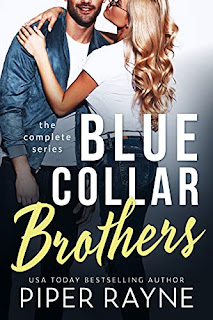 Sometimes heroes need saving too.
Three single women.
Three hot first responders.
Three first dates.
Will there be three happily ever afters?
THIS BOX SET INCLUDES…
Best Laid Plans (Blue Collar Brothers #0.5)
Join Maddie, Vanessa and Lauren as they attend the first responder bachelor auction and come up with a fun idea sure to keep the bidding interesting.
Flirting With Fire (Blue Collar Brothers #1)
A first responder bachelor auction leads to Maddie winning a date with her former high school crush and now firefighter, Mauro Bianco. It was only supposed to be one date, but as always, the universe has other plans and somehow, they turn into business partners.
Crushing on the Cop (Blue Collar Brothers #2)
Police Officer Cristian Bianco never planned to date his Commander’s daughter, no matter how good looking she is. But when she wins him at the bachelor auction, he’s left with no choice. He quickly finds out she’s gotten herself into a dangerous situation and decides to help her figure out an exit plan.
Engaged to the EMT (Blue Collar Brothers #3)
Paramedic Luca Bianco would never have thought he’d ask his arch nemesis to be his fake fiancée. He might have had a crush on Lauren back in high school, but that was then. Unfortunately, even he sees their head-on collision and he’s powerless to press on the brakes.
Blue Collar Quarantine (Blue Collar Brothers #3.5)
Life gets complicated when Chicago is put in lockdown and all three first responders must continue working. Especially, when the Bianco women get moved in together with Ma and Pa Bianco.
PLUS an extra Mauro and Maddie BONUS scene! What happens with Mauro decides to make a special dinner for Maddie? She becomes dessert.