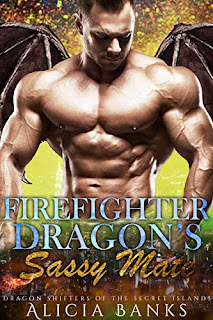 A firefighter dragon shifter and a dragon princess, destiny conspired to bring them together.
Felita Haverbaum
When her father announced that he was going to be married in six months, she had started to make her plans to disappear. There was no way she could face watching her beloved father marry a conniving gold digger. She cursed her four sisters who could just shift into their dragon form and fly wherever they wanted to go.
She is a princess, daughter of a dragon king. As so happened in many families of shifters, the gene had skipped her. And she was as grounded as an earthworm, which proved to be a huge issue when your father was the Dragon King of Isla'renora.
She has somehow managed to escape her kingdom, but bigger trouble was already waiting for her. She was kidnapped by the pirates.
The man she thought was her enemy was there to protect. Would she be able to learn the truth before it was too late?
Reece Cadell
For the first time in a while, he felt... better. The moment he met her, he wasn't antsy, he didn't have the feeling that he was missing something. And somehow, he knew it was tied to Katie. And yes she said her name was Katie, which he knew was not her real name.
She was authoritative and feisty, who tried to keep him at a distance. He wanted to tell her that she didn’t need to pretend to be someone else.
Those blue eyes kept creeping back into his mind since she left. There was a mystery going on there, and he wanted to be the one to solve it. And the hunt begins here.
Just solving this mystery would be enough? Or a big fight and a bigger mystery was waiting ahead?