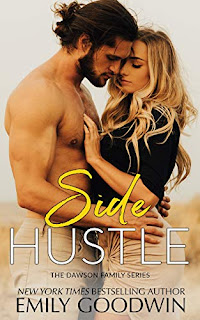 From New York Times bestselling author Emily Goodwin comes a sexy standalone romance about a single dad who has sworn off women and the nanny who is faced with the biggest con she has ever pulled, not falling in love.
When Scarlet Cooper takes a new job as a nanny, she assumes she’s going to work for the rich couple who hired her. But instead of pulling up to their million-dollar estate, she finds herself on the front porch of a humble farmhouse, looking into the eyes of dark and brooding single dad, Weston Dawson.It’s bad enough that Weston doesn’t have a fortune to charm out of him, but he’s also a cop.
After marrying his high school sweetheart only to have her up and leave weeks after their baby was born, Weston has sworn off women for life. All that matters now is taking care of his son, Jackson.
If anyone can break down the tough exterior of the former soldier, it’s Scarlet. But just when she’s close to getting exactly what she wants, she’s faced with a whole new challenge, which just might be the biggest con she’s ever pulled: pretending she doesn’t love him.