Ménage In The City 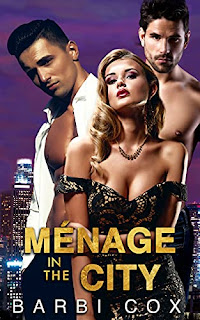 Ménage In The City

Two full-length billionaire age gap, why choose, ménage romance novels. They say three's a crowd. But is it?

Jack
The smokin’ hot blonde with luscious curves that just moved into my yacht club has a sassy
mouth full of complaints.
A sexy mouth that I can’t stand but I’d love to fill it with something else for her to choke on.
She owes me and I need a favor. A fake fiancee if only for just one hour, but this fakery is
more than we both bargained for...
Charlotte
My new landlord is an A-hole, one that I absolutely cannot stand!
But he’s incredibly attractive, and my body doesn't seem to care what I think.
He needs a fake fiancee when his ex shows up, and lucky for the A-hole, I don’t have plans
tonight.
Faking it with him is sexy, fun, and addictive.
His hot best friend with the older daddy vibe? Now that’s what I call friends with benefits!
A whole new adventure begins with this deliciously forbidden romance filled with emotion, heat, and page-turning passion. One that is slightly twisted and a whole lot satisfying, and of course a happily ever after!

Olivia is off-limits with a capital O 20 years younger. My best friend’s daughter. A dirty little secret that could get me killed. Her father’s a dangerous man with dangerous friends. There’s no choice but to end it. And I was going to… Until I saw her with my brother.
Olivia
I was devastated when Stephen pushed me away.
So, I did the unthinkable. Stephen’s younger brother… Chase was recovering from a professional hockey injury.
He was a temporary distraction.
How was I to know he was Stephen’s younger brother?
They say three’s a crowd. But, is it really?
Barbi Cox delivers another sexy slow burn, age gap, dad’s best friend why choose romance with lots of page-turning feels!