Crushing On My Brother's Best Friend 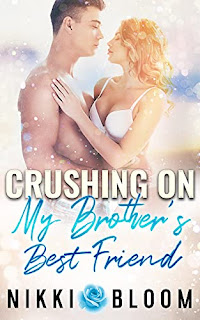 Crushing On My Brother's Best Friend

My brother’s best friend was back in town,
and he looked hotter than ever.
One spontaneous marriage later,
I found out about his secret.
Everything was going great for me until Spencer Reilley strode back into town.
Okay, not great.
My yoga teaching business was going nowhere.
Neither was my love life.
Then he comes waltzing into my life.
One one-night-stand later and my whole world’s in shambles.
My business is about to be ruined and my love life, well that’s too much of a mess to even mention.
Let’s just say I turned and ran from the whole disaster of an almost-engagement.
Which I’m starting to notice is a pattern in my relationships thus far.
But let’s stay on track here.
Spencer kind of ruined my life.
That’s when he comes up with this wonderful solution.
Marry me, he says.
Like I’d want his rocking body, his intelligent mind, and his — is that vulnerability in his eyes? — protective heart.
But what choice do I have?
It’s marry Spencer or lose everything that means anything to me.
Surely it won’t be too hard to be married to a sexy, secretive, former adventure guide.
Then I overhear a secret.
A secret which means he’s far more than who he says he is.
And far more dangerous.
Now I have a choice to make.
Do I stay with this man who I’m starting to care about, even if it’s dangerous?
Or do I cut and run again?