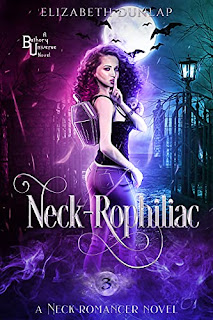 Goddess, you're not playing fair.
With a ghost, a Lycan, and a warlock by her side, necromancer Jaz Neck thinks her life is plenty complicated.
Too bad for her—things are about to get really crazy.
Jaz's status in wizard society is soaring. Her famous grandparents have named her as their heir, and the most powerful wizard in the world wants Jaz to join his necromancy fan club.
Despite her newfound prestige, she’s still reeling from almost losing Alec, and she’s starting to feel the effects of dating a ghost. She can't touch Gilbert, can't hold him in her arms. How can they ever have a future together?
When she discovers a solution that involves inviting someone new into her life, Jaz’s soulmates balk. As the school erupts into chaos, though, she finds her heart shifting toward this new protector.
And now, no matter what happens, Jaz is determined keep all four of the men she loves.
**Warning: For Adult Audiences 18+. Language and actions may be deemed offensive to some. Sexually explicit content. M/F, M/F/M/M, M/M**