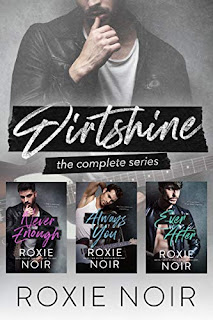 The complete rock star trilogy from bestselling author Roxie Noir! Get lost in these emotional, gripping romances - plus a bonus story you can’t find anywhere else.
Never Enough
It’s a simple enough transaction.
Marisol needs the money, and I need a nice girl to parade in front of the cameras.
No feelings. No strings. No falling for anyone.
I’ve been clean for months, but my record company’s not satisfied. Apparently it isn’t enough to only kick a heroin addiction - they’re insisting that I find a girlfriend as well.
If I don’t, they pull Dirtshine’s massive record deal.
It’s supposed to show that I’ve changed my ways, that I’ve turned over a new leaf, all that rubbish. But I’ve had it with suit-wearing wankers telling me what I’m to do, so I’m on the verge of telling them to go f*ck themselves.
And then she shows up.
Marisol locks me out of my own concert by accident. She’s wearing a suit at a rock show, searching for her lost law school textbook, has no idea who I am…
...and for the first time in years, I’m hooked.
She’s smart, driven, and utterly gorgeous. The sort of girl who earnestly believes in following the rules and hates when others don’t.
I’m a huge rock star, recovering addict, and general f*ckup.
Our relationship is for show, and that’s all. But with every smile, every laugh, and every breathtaking glance at her curves, I want her more.
Two months is all we agreed to. But it’s never going to be enough.
Always You
A kiss could ruin everything.
I was born broken, with a past full of ugly secrets and a brother doing life in prison.
Not that you’d know it if you read the tabloids. According to them I’m the rock-solid guitarist for the biggest band in the world. I’m the dependable one. The steady one. The anchor.
They don’t know the truth. No one knows who I am underneath, once the music is over and the lights are off.
No one but Darcy.
She’s my best friend. She’s my savior, my light in the dark, beautiful and talented and every bit as broken as me.
And I yearn for her. I have for years. I see the way she looks at me, what’s behind her eyes.
I know what she thinks about alone, in the dark, because how could I not know.
It’s getting worse. Every second, every heartbeat, every moment we spend together and every secret we share makes me want her more. Even though I know that one kiss could ruin everything we have, I need her.
But to get her? I’ll risk everything I’ve got.
Ever After
Once upon a time, a girl saved my life.
I was p*ss-drunk, high as a kite, and about to jump from a bridge.
She stopped me. I told her to f*ck off.
Exactly how all great love stories start.
A year later, I met her again. Sober this time, after yet another stint in rehab.
She’s still pretty, still a spitfire, still lights up a room when she walks in.
And she doesn’t realize I’m the guy from the bridge.
Frankie doesn’t know anything about me or my past. She doesn’t know I’m a former rock star or an ex-junkie.
She doesn’t know that two years ago, someone died and it was my fault.
She doesn’t need to know. She’s got problems of her own, and they’re what keep her coming back to see me time and again, even when we both know she shouldn’t.
I should be staying far, far away from this girl, but it’s like telling water to flow uphill. Can’t be done.
Frankie and I may be going down in flames, but we’ll be going down together.