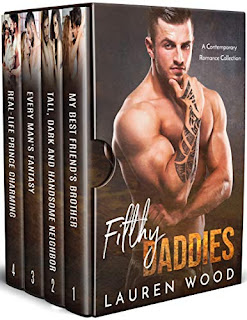 Get ready to lose yourself in these four steamy stories featuring irresistible heart-of-gold daddies.
Love isn’t easy, but these men will have to use all of their charms and talents to seduce and get their HEAs against all odds.
My Best Friend's Brother: An Enemies-to-Lovers Romance
Hooking up with my best friend’s brother is so against the girl code,
But fantasizing about him is harmless right?
Well…it was until I found out that he’s my new snarly, domineering boss.
Here’s the thing about Jack Stanton,
He’s the kind of man that can make you tremble in fear and desire.
One minute I hate his arrogant, golden boy act, and the next,
I want to rip his perfectly tailored suit of that chiseled body and devour him.
Like I said…OFF LIMITS.
The line between love and hate quickly gets blurred,
And turns into two little pink lines…FML.
I’ll never regret my night with Jack but what I can’t face,
Being just another notch on his designer belt.
Real-Life Prince Charming: A Friends To Lovers Romance
Friends? I wouldn’t exactly call Frank a friend.
He was at one time, my best friend. We shared everything.
Honest. Truthful. Sinfully sexy.
Way out of the league of this awkward girl that drew dresses in all her notebooks, dreaming of a fashion line of my own.
I was a dreamer and Frank was the real-life Prince Charming that every girl wanted.
Fast forward ten years and I’m back in our hometown of Hampton.
We’re both back and things started to get interesting.
He’s changed.
He’s been in the military, grown into a dominant, strong man and it shows.
That boy that I dreamed about, was now a man that took my breath away.
Rock-hard abs, thick biceps, and a smile that said he knew what I was thinking.
We’re all grown up now.
I shouldn’t be acting this way.
What’s wrong with me?
Breathe Amber.
Breathe.
We’re just friends…
Until he kissed me.
Then, everything changed.
His lips were my every desire.
His body, my every need.
Was one kiss, going to ruin a decade of friendship?
Tall, Dark and Handsome Neighbor: A Friends to Lovers Romance
What do you say - when the tall, dark, and handsome musician from next door asks you out? You say yes, quickly.
Nick Bastil has more money than God, boyish good looks, and is the lead singer in a great band.
The only thing missing is a girl by his side.
After meeting him, I knew that I wanted to be that girl.
His sweet demeanor and smoldering looks get the best of me.
I know that I can’t deny him forever.
I can’t deny myself another day.
Nick is that guilty pleasure I had to have.
After waiting for a lifetime, I know that I’m finally ready.
Nick’s hard body and sly smile convince me.
I want him to be my first…
I knew what my present held, but I had no idea of the future.
Would Nick be in mine… or was this just for one night? One blissfully long night?
Every Man's Fantasy: A Friends to Lovers Romance
I’m the best quarterback in my college’s history.
Best numbers, best plays.
That gets me what I want, anything I want, except what I need…new girl Kimberly.
Kimberly is every man’s fantasy, but I can’t have her.
She’s the only woman who has ever told me no.
So, of course, I can’t stop thinking about her.
I had to have her, convince her.
She had to feel it too.
She wanted it just as badly. I knew she did.
I just had to get her to say yes. Repeatedly, until she couldn’t refuse me again.
How could one kiss change everything and another destroy it?
Each book in this sexy-as-sin collection can read as standalones. No cliffhangers. HEA guaranteed!