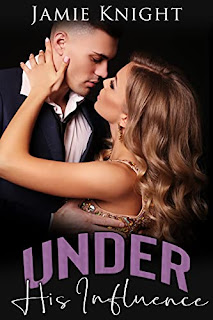 I've never seen curves like hers.
And I want to make them mine.
I'm a billionaire record producer.
Who can get anything I want.
And from the moment I set my eyes on Jonna,
I wanted her.
It's not just her perfectly plump @ss.
Or those thick thighs that I want to squeeze.
It's also that she likes music as much as I do.
And she's feisty- I love a challenge.
When a pandemic hits, we're quarantined together.
And I plan to lock her down for the full two weeks.
She'll be under my control, to do as I command.
But after that, it'll be over.
We'll go back to work at the recording studio.
Life will return to normal.
Because I never get attached.
I'll tie her up 'till I'm done having my way with her.
But what if she's strumming my heart strings for good?
Under His Influence is a standalone office quarantine romance featuring a dominant billionaire alpha male and a feisty virgin. It was originally published in the Rock Hard anthology and this is its first time being published alone. It has no cheating, no cliffhanger and a very happily ever after.
It's part of the Love Under Lockdown series, which are separate books with the theme of falling in love during quarantine. They can be read and understood on their own, but after you devour one, there are plenty more to enjoy.