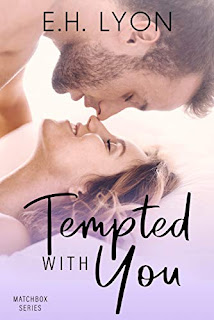 This sexy former hockey player has never been so tempted…

Nate Kade is many things—former sports star, owner of the successful bar Matchbox—and there’s no shortage of women willing to warm his bed for the night either. Everyone around Nate is settling down, but that just isn’t his style. No, he prefers against-the-door activities with a woman he’s just met. But he should probably pay attention to details. Because that one-night-stand beauty?
Turns out she’s his business partner and friend’s newfound sister—oops.
Melanie is ten years younger, just discovered she has an overprotective brother, and is new to town. Nate makes it clear that their one night will not be getting a repeat, but she isn’t entirely on board with his policy.
Not only is Melanie his new next-door neighbor, but she seems to be turning up everywhere—including the ice rink where she also skates. Nate is finding it hard to resist a second round. He’s just beginning to realize that he may finally be tempted to have it all with someone.
Tempted with You is the fifth and final sweet and sexy standalone novel from the “Matchbox” series, where you can revisit your favorite characters throughout.