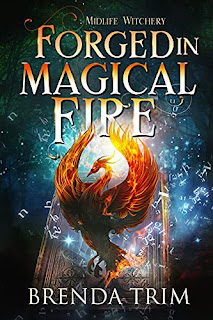 Guess who just discovered her Phoenix lineage? I'd rather go back to just being cursed. Hot flashes have nothing on bursting into flames...

Imps are taking over Cottlehill Wilds, wreaking havoc at every turn. Chasing them around my store with unreliable magic, while not alerting the mundies, is harder than raising twins.

To make matters worse, the target on my back has never been bigger since I killed the demon our resident psychopath summoned. Car bombs and ambush hoards? Someone really wants me out of the picture.
And wouldn't you know that Fate has decided to mess with whatever is developing between me and Thanos just as I finally decided to open up to him.
Bad news for all the haters: it's going to take more than a car bomb, a trip to the Underworld, and a dip in the River Lethe to get under my lightly wrinkled skin. With a top-of-the-line moisturizer and a fully charged fire extinguisher, I've got this too.